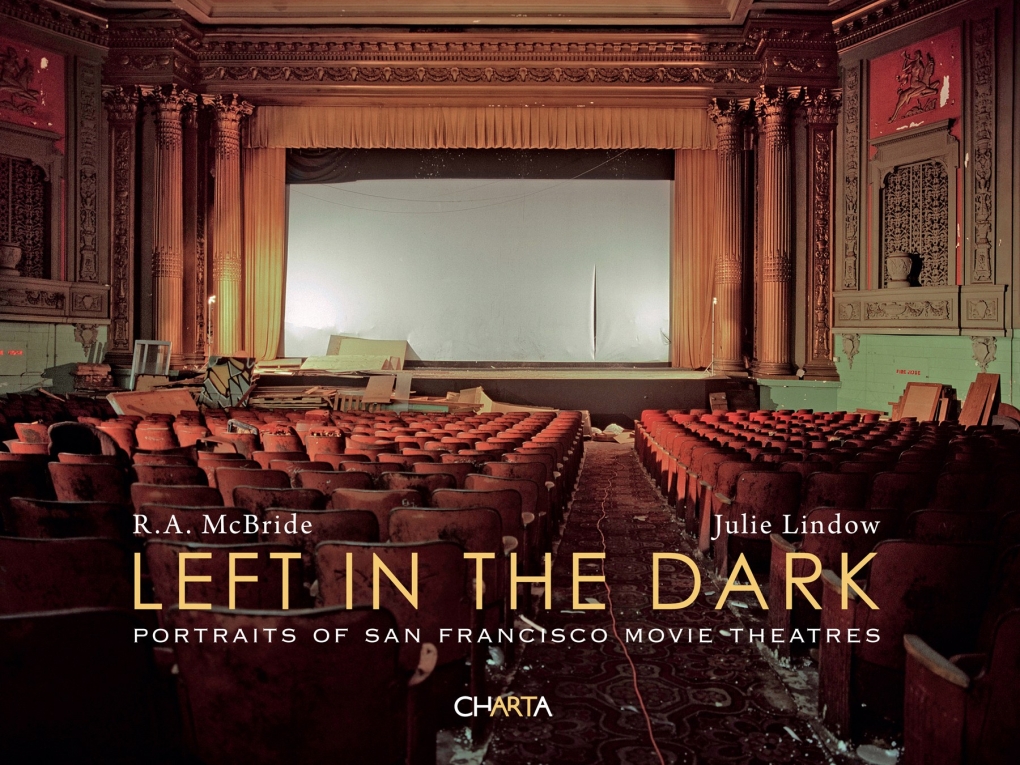 Left in the Dark: Portraits of San Francisco Movie Theatres

Left in the Dark: Portraits of San Francisco Movie Theatres: Casting the theatres as characters within the city’s cultural landscape, scholars and film exhibitors, including Rebecca Solnit, Eddie Muller, Chi-hui Yang, and Gary Meyer, among others, uncover a wondrous variety of forgotten or never-before revealed histories. Alongside the essays, R.A. McBride’s vivid portraits of the Castro, New Mission, Balboa, and many other theatres illuminate the role of the movie house as a great social nexus. McBride gained rare access to the interiors of closed theatres, picturing them empty and allowing the grandeur of the architecture to take center stage.

As society retreats from public life into the anonymity of multiplexes and personal entertainment technologies, our moviegoing heritage becomes ever more significant and inspiring. San Francisco is fortunate to be one of the world’s most vital moviegoing cities and to have so many of its historic movie houses still standing. By drawing a continuum from past to present, Left in the Dark offers hope that even as these landmarks crumble, the spirit of cinema thrives.

Praise for Left in the Dark:
“This book is absolutely wonderful!! I had the greatest time reading, or rather, immersing myself in its sense of celebration. It not only evokes the spirit and experiences of another era, but shows that they are definitely alive today, even in these grim alienated times. In that sense the book is as politically important as it is entertaining, informative, and revelatory. I am going to give copies of it to everyone who carries the torch for a more humanistic collective society and see if we can re-enliven that quality of spirit and community.”
Jerry Mander, Author: In the Absence of the Sacred; Four Arguments for the Elimination
of Television; The Case Against the Global Economy

“McBride’s well-crafted photographs provide a valuable record of a disappearing institution as well as an insightful look behind the scenes at the mechanisms and structures that create the visual experience we call cinema.”
Sharon Lockhart, Artist

Press for Left in the Dark: